This section contains before and after pictures of projects that we have completed. These are examples of how we can enhance your home and provide a whole new curb appeal.

In one neighborhood in Plymouth this year, we did several driveways and so did a competitor. Click here to see the difference!

Before and After Featured Project Profiles 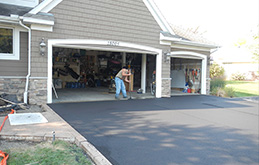 The homeowners wanted to improve the appearance of their front entry. They also needed to increase the size of their driveway to make more room to park additional vehicles. The owners decided on the decorative look of a stamped concrete front entry and matching stamped concrete driveway borders. The new asphalt driveway was imprinted with StreetPrint pavement texturing in the Random Slate pattern followed by the application of StreetBond high performance colored coating.

This project had a unique scenario of two driveways sharing one entrance on the same parcel. The objective was to make two individual driveway entrances, re-design both driveways and install a berm to be landscaped later. The re-design project resulted in added privacy and renewed curb appeal with two distinct driveway entrances. These pictures show the process from start to finish. 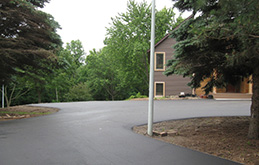 The homeowners wanted to eliminate the steep and long front driveway with no parking at the house. They also wanted the driveway to look at the front door instead of the front of the house. The Original Driveway Design created a parkway-type driveway through existing trees with room to park eight card while still being able to use the garages. 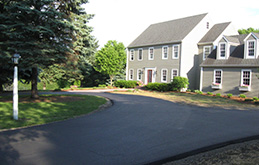 The main purpose was to direct visiting traffic to the front entry instead of the garage side of the home. The project also included replacing a poorly installed asphalt driveway that was less than 15 years old, correcting the drainage and re-designing the front entry. 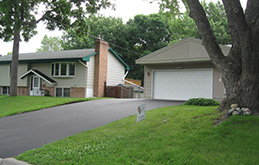 The room under the garage was leaking because of the poor drainage of existing brick paver driveway. The project included removing brick pavers, waterproofing the top 12” of existing garage floor and wall, correcting the drainage and install a new decorative exposed aggregate driveway with traditional concrete borders. 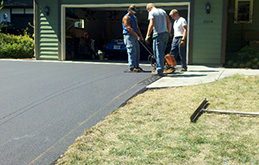 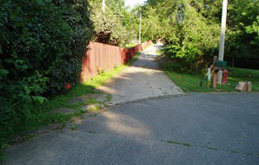 Remove broken concrete driveway going straight up from the street to the garage and replace with an asphalt driveway curving up to the garage. Adding trees to enhance the appeal of the drive. 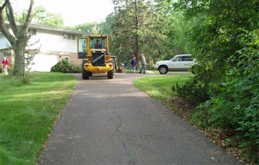 Remove existing drive that lead visitors into the garage. Move trees in the front yard and add a circle turn around to the new driveway to direct visitors to the front door. 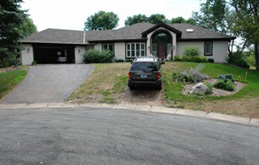 Install new driveway taking advantage of the width of the property to create a less steep driveway, allow space to turn around by the garage instead of backing into the street and create an additional parking area by garage. 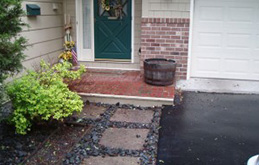 Create and inviting sidewalk and step.

The difference between the ordinary and extraordinary!